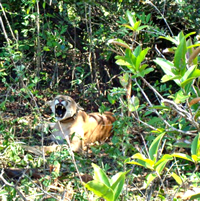 “Charles S. Fisher takes us across several continents and 25 centuries, as he retraces the migratory path of a radical traditional of Buddhism. Determined to recreate the context in which the Buddha became enlightened, we move far beyond urban centres where monastic study, doctrine, and Buddhist scriptures have evolved, to examine the ways of more solitary practitioners living in the wild.

Critically, through entering nature and experiencing its indifference to our self-soothing stories, we have the power to stimulate awareness of our mortality- that unpalatable eventuality that our society so assiduously covers over with distractions and comforts of all sorts.

This book will be of interest to anyone for whom meditation is an important tool, as well as to cultural and religious historians. However, the extremes of self-deprivation and isolation historically practiced by forest-dwellers are unlikely to appeal to many readers as a current way of life. Perhaps the example of forest-dwellers will instead provide an incentive to look beyond our alienated technological lives, to take in the weather, the seasons, and to irrigate our roots in a living world, which needs us to become aware of her before we can know ourselves.”

“I found this book both inspiring and insightful, as I did the earlier volume in this two part set. While the author’s research is itself impressive – giving us the historical overview of how meditation and/with nature (wild especially) have served as both means and ends in leading seekers and sages to understanding and great wisdom – his greater contribution lies in his having shared his own “interpretation” of nature. This is done, of course, in the drawing of historical data, but significantly as well, by Fisher’s ability to draw from his own personal anecdotal material. This will give you pause, and at times a chuckle. This is what for me gives this book its special flavor and its greatest value. Thus, for me, as one who calls himself both a “meditator” and a “nature person” the book affirms and stimulates me to go “deeper” and be more fearless in my practice/investigation.

I am also reminded of Thoreau’s axiom “in wildness is the preservation of the world.” The words are of little use unless taken to heart. The time for that is always now, and I’m extremely grateful for the reminder and support this gives. It’s always easy to look at the obstacles today’s world provides, or even despair in the notion that “it’s too late…” I heard the sound of wild turkeys gobbling just outside this morning, and later the sounds red-tailed hawks make while soaring overhead. Just now, the sliver-moon was shining.”

5 stars A prescription for daily life from a Doctor of Mathematics.

“I have had the pleasure and privilege of being instructed by Charlie in meditation, being taught Buddhist dharma, and accompanying him on walks in nature. And now I have read about how the original forest monks practiced in solitude and seclusion in a world that no longer exists, but the principles of which are still pertinent today. His eye is keen in observing the details of Chinese landscape paintings, his scholarship is broad in discussing the origins of Buddhism and meditation, and it is simply fascinating to read his selection of Japanese poetry and listen to him analyze those selections to reveal how the monk/practitioners may or may not actually have practiced in the wild. And, wonder of wonders, I now know how to respond to those ineffable Zen koans. There is more in this book than one reading will yield!”

“Being neither a trained Buddhist nor a Buddhist scholar I offer this first Amazon review with great humility, particularly in view of the strong endorsements on the jacket from Jack Kornfeld and Wade Davis. The book is a veritable cornucopia of Buddhist history and the varieties of Buddhism from its beginnings in India to its present day incarnation in the San Francisco Bay region. I shall be feasting on it for months to come. I have learned more about Buddhism and its many flavors in the few days that I have been reading it than in ten years of ad hoc reading. Charles Fisher’s scholarship is immense, yet conveyed lucidly for the layman. I am more than grateful to him.”

The Buddha in is the meditation dome of the San Juan Center which was run by Dhiravamsa. It is now the lair of the Sea Shepard Society.

Portrait of the author by Lisa Bleier